As many of you know, when wintertime comes and cars are in the cold for for three to four months it can become a struggle fo some batteries to stay alive. A dead battery is a problem that a lot of people encounter, either when winter rolls around or when you put the car away for an extended period of time. You come back to start it, and the battery is dead.

A very cool product for car batteries is from a company called CTEK, and they make advanced battery chargers. 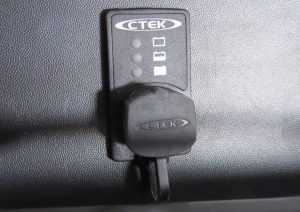 So, you just hooking up the CTEK comfort indicator, as they call it. It comes with two eyelets that connect to the battery. It’s just a clever little light system that shows you what condition the battery is in. Green light means good. Yellow light means eh. Red light means dead. The beauty of this, it’s designed to be installed in a panel, so you could literally install it in a panel back into your car or under the hood if he wanted. Just plug it in, very easy.

This is a pretty sophisticated unit (it’s a CTEK MUS 4.3), and it’s amazingly affordable too. Iit has an eight step process where it actually looks at the condition of your battery and then goes through a reconditioning process. You can actually desulfate the battery.

If the battery’s been sitting for a long time in a state of deep discharge, you can actually help reverse some of that sulfation where the lead sulfate turns to crystals. If those crystals aren’t too hard yet, this can reverse that process and actually allow the battery to take a full charge.

Will it save a dead battery?

It can actually save what you might have thought was a dead battery. Let’s try that out and see if the desulfation saves one of my dead batteries. After that it goes into a floating charge. They also have another long term charge, pulse charge. Where it just lets the battery drop a little in voltage and then it gives it a bit of pulse to charge it up again. That’s been proven to be easier on the battery, and it prevents it from overheating or doing any kind of damage. It’s got a lot of technology in here. It’s actually got a microprocessor in here, so it’s pretty darn sophisticated. A lot more sophisticated than those old black boxes that you’ve probably seen sitting around in your dad’s garage.

Well, let’s see how battery fares. This thing’s been sitting in garage for about four to five months now. And yes, It hasn’t been started. It hasn’t seen much of a charge. We’re plugged in, and it looks like the battery is as dead as it comes. 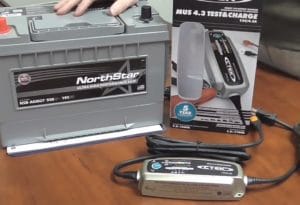 It shows 1.5 volts and it’s completely dead, so let’s leave this hooked up for a while and see if it will actually revive this battery or not. Yeah, it’ll be a good test to see how it does that job.

You can see it’s powered now, and we are in car winter mode. If we press the mode again we could go to recondition mode as well. Now all three of those lights are lit up, to suggest it’s going to do car battery, winter mode, and recondition mode. 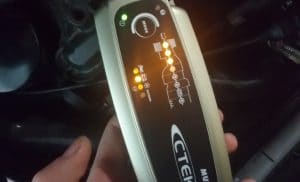 These first three lights were showing how much charge was in the battery. That’s actually wrong. Number four has a red circle. Number five has a yellow circle. Number six has a green circle. Those are what show you the charge level of the battery. The lights then go to show you what step it is in the eight step process. When it was just plugged it had the three lights lit up. It already did the de-sulfation. It already did the test to see if it could take a charge. It said yes it can, so then it went to step three to do the bulk charge, which is completed now, so now it’s gone into step four, and these lights will continue to light up as it goes through those eight steps. That’s actually what those lights mean.

Waking Up An Old One

This is a battery we’ve had sitting in the shop for a couple of years. Two years to be exact.

The battery indicator is flashing red which means she’s pretty close to dead. But at least we’re seeing a flashing light, which means it’s not completely dead. To try to revive it we’re going to plug in this CTEK Multi 3300 model. This is their best selling model. It’s a four stage one instead of the fancy eight stage ones like we showed you. But it still does its patented de-sulfation stuff to try to revive the battery. Then it does the usual bulk charge and maintenance charging. 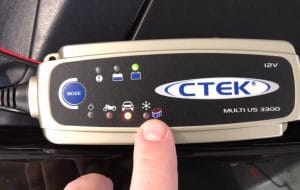 Just plug this guy in, and let it sit for a few hours. We’ll see if we go from a flashing red light to a yellow light to a green light. With all these things charging.

It’s blinking green, which is a good sign. It’s showing almost full, which I assume half to full right now. We’re on our way to recharging a whole lot of batteries, and keeping some fresh for the springtime when we’re going to get back on track. 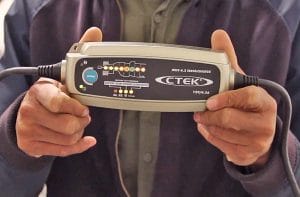 It’s gone through all eight steps now and it’s just gone into maintenance mode where it’s doing its pulse charging to keep the battery charged up nicely. We also put the rubber protector on the CTEK here, since it’s living on the ground and it’s going to get kicked around. We’ve got all eight lights, so it’s done all eight steps. It’s gone into its final pulse mode maintenance.

That’s pretty awesome. A two year old battery that’s been sitting there deeply discharged has been revived. Good on you, CTEK. For any of you guys out there looking for a battery, a sophisticated battery charger, I’m a big fan of these things from now on.

If you have your own experience with a CTEK please tell us about it in our comment section.

How to Remove Scratches From a Car