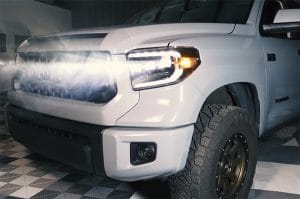 The rise in LED lights on vehicles (whether on the outside or inside) is a trend that can seldom be ignored. Many car brands are coming out with their own “Smart LED” headlights, and many drivers are clamouring to replace their halogen lights with brighter, more energy-efficient LED lights.

However, there is a question surrounding the legality of LED lights. This is because they are a completely different animal in comparison to the halogen or xenon lights that have been prevalent for decades, and need extra regulation as a result. The energy-efficiency, for example, is a double-edged sword in the wrong hands; LED headlights can emit more light for the same amount of power, leading unsavvy drivers to potentially be a danger on the road.

The regulations on LED lights aren’t too different to existing laws on headlights as a whole. Typically, every country or state will have the same—or at least similar—laws for all types of headlights. The main issue is that it’s easier to break the law with after-market modified headlights, so it’s talked about more, giving the illusion that LED headlights have stricter regulations.

Take, for example, the Department of Transportation (DOT) regulations for acceptable headlights. They aren’t anything one might not expect, and can be broken down into beam intensity, brightness, and color.

That was a basic overview of the DOT regulations regarding headlights, with LEDs as no exception. There are other regulations surrounding headlights, depending on where you are located, and several organizations that propose changes to such regulations. Without getting into too much detail, regulations such as the Federal Motor Vehicle Safety Standards and bodies like the Society of Automotive Engineers are key players in the change in both regulations and standards for headlamps. 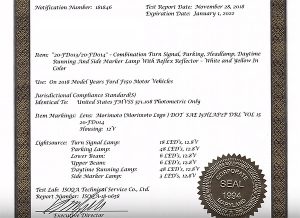 Organizations like the above help new technologies and applications make a smooth transition into the market. For example, both FMVSS and SAE began to outline potential regulations and develop optimal usage for Adaptive Driving Beams (ADB), which is a fancy way of saying LED lights that can react accordingly to the environment. In fact, with the amount of research and testing that is going into ADB, it’s possible that it’ll be a commonplace feature of vehicles in the near future.

Other aspects that these semi-regulatory bodies delve into, such as minimizing glare, attempt to quantify issues and find solutions/alternatives through heavy testing. Without getting too detailed, bodies such as SAE outline a potential path that technologies such as ADB and LED headlights can take in the coming years.

In a sense, they help new technologies become “more legal” through testing and tweaking.

As touched on before, LED headlights are completely legal. The only problem is (and why there is often the misconception that they are illegal) that improper fitting or manufacturing might not comply with regulations. Essentially, as long as they are designed, manufactured, and installed correctly, they are completely fine to have on the road. Below are a few cases where fitted LED lights can be deemed “illegal”.

Some people don’t realize how bright LED lights can be if you don’t adjust the fitment. LED replacements can be up to ten times more energy-efficient than halogen lights, meaning for the same power you get up to ten times the brightness. This is where a lot of people trip up and end up inadvertently breaking the law and putting themselves and others in potential danger.

If you’re not careful, it’s easy to mess this up and end up with headlights that are simply too bright. Most LED bulbs are far more energy-efficient than the standard halogen lights in cars, so it is highly likely that without doing the research, a new LED mount will have a far greater output than expected.

It’s important to buy lights that are compatible (output-wise) with the halogen bulbs you’re trying to replace to avoid this. Taking a look at the lumens (lm) for your existing bulb and keeping it in mind when picking out an LED bulb will ensure that you will stay compliant with light intensity regulations.

On the other hand, some people could get in trouble with the law despite picking out a compatible LED output. This is typically the result of glare or overly narrow beam.

What happens in this case is that the LED bulbs are incompatible with the reflectors they’re mounted on.

Most reflectors are specifically designed for a certain bulb and light intensity to comply with beam regulations; to put it simply, beams have to be at a certain angle and be a certain diameter to be compliant. 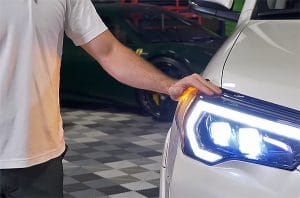 When a high-intensity LED bulb is mounted on an incompatible reflector, there is a chance that it will either be too wide or too narrow (or even reflect in weird directions). On the lower end (too narrow), there’s the risk that not enough of the road is illuminated, thus not being compliant with baseline brightness regulations (not to mention the danger of limited vision).

If the reflector results in a glaring beam, it can be even more dangerous. Passersby, pedestrians, and oncoming drivers could be hit with the bright glare and become disoriented. This is similar to the first DOT regulation mentioned above (“intensity”), but in this case, you could get glare from your lamps regardless of output intensity.

So, to combat this potential issue, it’s important to find LED-specific reflectors that “project” a beam that is within the limits of safe driving. It’s risky to try to install LED bulbs in non-LED reflectors, as the limits defined by regulatory bodies are fairly intricate. It’s best to play it safe in this department as well.

Color: Don’t Do It

It’s important to emphasize this point. Any colors that aren’t passable as white or in some cases yellow are a no-go. Many people get pulled over because they didn’t bother to check the regulations regarding beam color. The official description, in summary, is that you should only have colors that don’t alter the appearance of any objects or people on the road. In an even more simpler sense: no red, yellow, green, blue, etc.

Some states are more lenient than others when it comes to LED regulation. For example, California has slightly more relaxed laws regarding the color of LED headlights. While the state law describes that only white and yellow are to be used as beam colors, it is possible to have an underglow (or “neon” tint) accompanying your lights.

This means that if you want to add some color to your lights, you are free to do so—to an extent. California’s DMV states that you can have underglow LED lights as long as they are non-glaring and under 0.05 candela per square inch. As always, make sure that if you do want a neon look for lights, double-check the luminosity of the bulbs beforehand.

In terms of color, you can accompany your white or yellow lights with an underglow of any color except for red. Some states don’t allow blue and red, since they are the colors of police vehicles, but a blue underglow is ok to have in California.

Other states are strict about headlight laws, taking into account situations such as wet weather and construction zones. Texas is a little more relaxed in this regard, and only requires that you turn on headlights when visibility is below 1000ft and in the nighttime. However, it is slightly more strict (on paper) with individual lights on a vehicle. The law states that every headlight must have an accompanying DOT or SAE seal, certifying that it is compliant with the regulations. While it is unlikely you’ll get written up for not having a DOT sticker on every bulb, it is best to play it safe. 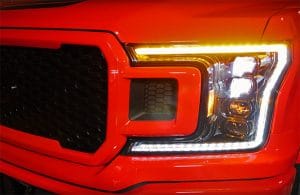 In terms of color, though, Texas seems to be more strict. Officially, only white headlights are allowed, so trying to install an underglow (let alone solid colors) on your vehicle might not be the best idea. Either way, if it doesn’t infringe too much on your surroundings and you follow headlight regulations, it’s not too likely you’ll run into any trouble.

In conclusion, are bright LED headlights legal? Yes. Just make sure you are familiar with national and (if you’re in the US) state regulations for headlights and you won’t have to lose sleep over your LED bulbs.